At the Pain Management Center of Flint, Dr. James Culver and nurse practitioner Dr. Monica Culver treat a wide variety of pain conditions. Patients come to us from throughout the Flint area to find relief from chronic pain resulting from work or sports injuries, accidents, headaches, and many other conditions.

Learn about some of the most common ailments we treat and call us for an appointment at (810) 720-8900. We have helped relieve pain for thousands of patients in Genesee County, Michigan and we can help you, too.

Back and Neck Pain

Back pain can be a nuisance or it can be quite disabling. The most common sources of back pain include:

When it comes to people with neck pain, the most common problems are related to the discs located between the bones, facet joint pain, and spasms of the muscles of the neck. Problems in the neck can cause not only neck pain but also pain and numbness of the arms, and sometimes headaches. The most common sources of neck pain include:

No matter what type of spinal problem you have, Pain Management Center of Flint can help with customized programs that reduce or eliminate pain. Dr. James C. Culver is a double-board-certified pain relief specialist who has helped thousands of patients in Genesee County overcome back and neck pain.

Treatment for Back and Neck Pain

Dr. Culver can help you overcome chronic pain problems through a variety of advanced injections combined with physical therapy to promote functionality. When it comes to back and neck pain, epidural steroid injections are most commonly used, although other approaches are employed when indicated.

In appropriate cases – when your pain is due to facet joint arthritis of the cervical or lumbar areas – facet joint injections are beneficial. For low back pain due to sacroiliac joint pain, sacroiliac injections can be effective. Fluoroscopy is typically used to guide placement of the injections and ensure maximum effectiveness. For some procedures ultrasound guidance is preferred.

Under Dr. Culver’s care, many patients with spine pain are able to avoid invasive surgery and large doses of medication. If you have back or neck problems that have not responded well to other treatments and therapies, you may experience significant pain relief through Dr. Culver’s comprehensive therapies and personalized care.

The longest nerve in the human body, the sciatic nerve, runs from the pelvis through the buttock and hip area and down the back of each leg. It controls many of the muscles in the lower legs and provides feeling to the thighs, legs, and feet.

The term “sciatica” refers to pain that radiates along the path of this nerve — from your back into the buttock and leg. Sciatica isn’t a disorder in and of itself. Instead, it’s a symptom of another problem involving the nerve, such as a herniated disc. And although a herniated disc is by far the most common cause of sciatic nerve pain, other conditions can also cause sciatica, including:

The pain can vary widely, from a mild ache to a sharp, burning sensation or excruciating discomfort. Sometimes it may feel like a jolt or electric shock. Sciatic pain often starts gradually and intensifies over time. It may be worse when you cough or sneeze. Prolonged sitting or walking can also aggravate sciatica symptoms.

In addition to pain, you may experience numbness or muscle weakness along the nerve pathway in the leg or foot. In some cases, you may have pain in one part of the leg and numbness in another. Tingling or a pins-and-needles feeling, most commonly affecting the toes or part of the foot, are other common symptoms.

Shingles is a nerve root viral infection that causes pain and a band of rash that spreads on one side of your body. It is caused by the reactivation of varicella zoster, the virus that causes chickenpox.

People who have had chickenpox in their youth can develop shingles, also known as herpes zoster, in later years. After an attack of the chickenpox virus, most but not all of the viral organisms are destroyed. Surviving organisms lie dormant in a location where the nerve roots branch off from the spinal cord (the dorsal root ganglia).

In some people, the virus stays dormant permanently. In others, the virus reactivates when stress, disease, medication, or aging weakens the immune system. When reactivated, the virus travels along the nerve fibers to the skin’s surface, where it causes shingles instead of chickenpox. Most people who get shingles will not get shingles again, although it does recur in some people.

The reawakened virus usually causes a tingling or burning sensation over an area of skin. Two to five days after the first symptoms appear, a painful rash will occur. A cluster of small, thin bumps turns into blisters that resemble chickenpox lesions. The blisters fill with fluid, break open, crust over, and then disappear.

This entire process takes about four to five weeks. If the pain from shingles does not go away, it is called postherpetic neuralgia (PHN). This condition can last from weeks to years after the rash disappears and is caused by nerve damage.

The best time to treat shingles is within the first two weeks after its initial onset. From two weeks to one month, approximately 90% of our patients get good results. From one month to two months, approximately 80% of patients obtain substantial relief. After two months, the success rate goes down considerably.

However, if a person is having persistent pain, even if it has been months or years after the initial outbreak of shingles, it is frequently worthwhile to undergo treatment, because some people still obtain outstanding results.

At your initial visit, Dr. Culver will discuss your medical history and conduct a physical exam to determine which nerves have been affected. At that point, he will develop a treatment plan.

When you suffer from cervicogenic headaches, turn to the pain relief specialists at Pain Management Center of Flint.

The joints connecting the top two or three levels of the cervical spine to the base of the skull handle almost 50% of the total motion of the entire neck and head region. Thus, these joints absorb a continuous amount of repetitive stress and strain, in addition to bearing the primary load of the weight of the head.

Fatigue, postural misalignment, injuries, disc problems, joint degeneration, muscular stress, and even prior neck surgeries all can compound the wear and tear on this critical region of the human skeletal anatomy. A patient may also develop a narrowing of the spinal canal itself, leading to spinal stenosis – also a possible source of headaches, among other symptoms.

Cervicogenic headaches usually occur on a frequent basis, sometimes on a daily or near-daily basis and sometimes continuously. These headaches frequently feel as if they are located in the back of the head and radiate forward, usually affecting both sides of the head. Sometimes they are associated with migraines (vascular headaches). It is now recognized that many patients actually have elements of both tension and migraine headaches, or so-called “mixed” headache syndrome.

Cervicogenic headaches are very common in elderly patients due to arthritic changes in the cervical spine. Another frequent cause of cervicogenic headaches is a whiplash injury, commonly sustained in car accidents or falls. Headache pain described as radiating from the neck or occipital area suggests this diagnosis.

Pain of cervical spine origin sometimes can be felt in the front of the head. Loss of sensation over the occipital area, often on one side, can accompany occipital neuralgia. Neck muscles are tender, frequently in spasm, and their movement can aggravate the pain.

Most treatments for back and neck pain, sciatica, shingles, cervicogenic headaches, and other conditions can be performed in the office, eliminating expensive facility fees associated with hospital- or surgery center-based treatments. Call Pain Management Center of Flint today at (810) 720-8900 for an appointment with Dr. James Culver or Dr. Monica Culver to learn more about your pain relief options. 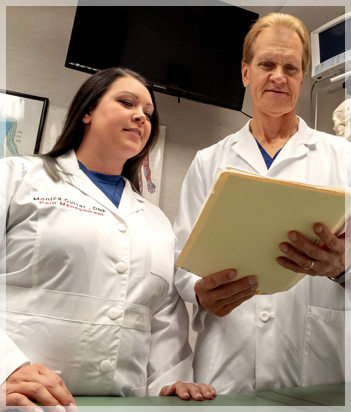